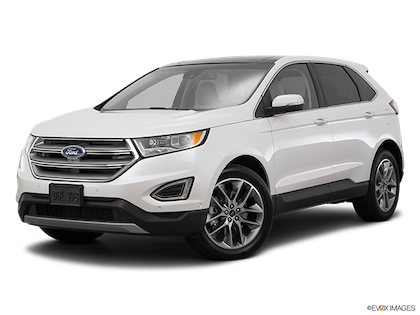 Eight years after introducing the Edge crossover, Ford has released its most significant update yet. The redesigned 2015 Ford Edge measures four inches longer than its predecessor and has more storage room. It also brings in two new engine choices and available driver assistance technologies.

The best-selling midsize crossover seating five is the Ford Edge. For 2015, the Edge is all new, with a turbocharged four-cylinder engine now standard. Four trim levels, more storage capacity and an upgraded driver assist package are among the highlights of this latest edition.

The 2015 Ford Edge marks generation two for this midsize crossover utility vehicle. Its dimensions are nearly the same as the outgoing model, with Ford inserting an extra inch between the wheels and four inches overall. Slightly taller too, the current Edge retains the profile of the original, but with several enhancements of note.

The second generation Ford Edge ups the quality quotient by bringing in better materials across the dashboard, on the doors and across the seats. Ford does all this and holds the Edge’s price steady at $28,100.

The Edge’s instrument panel sits behind a three-spoke steering wheel with an adjustable tilt and telescopic column. That instrument panel features a centered analog display for the speedometer. All other driver data, including fuel information and all-wheel drive details are digitally displayed on either side of the speedometer. Cruise and secondary driver controls are located on the steering wheel. Window and side mirror controls are on the driver’s door.

At the top of the center stack is the available SYNC system with MyFord Touch. MyFord Touch works with voice and touch commands, and has been improved for easier use with this model. Still, it takes some getting used to and as tested it provided accurate and clear directions to the three destinations selected.

Behind the rear seat is a large, open storage area. The spare tire is beneath the base of the floor and open storage cubby as well as storage hooks are present. Edge buyers can also order upgrades that bring in a Sony audio system with HD Radio, a heated steering wheel, a panoramic roof and remote start.

A turbocharged 2.0-liter four-cylinder engine making 245 horsepower is now standard. It is based on an earlier EcoBoost engine with twin scroll turbocharging now present to deliver improved performance while helping maintain the 30 mpg highway average the earlier engine offered.

Also available is a turbocharged 2.7-liter V6 engine making 315 horsepower. For those who prefer a naturally aspirated engine, a 3.5-liter V6 rated at 280 horsepower is available. All three engines are paired with a six-speed automatic transmission.

Both turbo engines deliver generous amounts of power and the base engine has virtually no turbo lag. Indeed, the standard engine provides superior off the start acceleration and keeps delivering power at higher rpm. With its upgraded towing capacity, the base engine matches the 3,500-pound trailer rating of the other engines.

Ford continues to update its MyFord Touch interface to make it more user-friendly. The latest version makes a decent effort to deliver a better experience, but the screen is more complicated than it needs to be. Once you find the navigation button, the Ford Edge delivers clear and concise directions.

Other technologies cover such features as hands-free parallel park assist. New for 2015 is parallel park out whereby the Ford undoes the parallel parking. This vehicle also performs perpendicular parking, backing the Edge into a parking space. The driver assist package is a $5,600 add-on for the Titanium and Sport editions.

Safety ratings from the Insurance Institute for Highway Safety (IIHS) for the 2015 edition are not yet final. However, based on previous testing, the 2015 Ford Edge should achieve the institute’s highest score of good in several categories including: moderate overlap front, side, roof strength, and head restraints & seats.

Besides the usual suite of air bags, the Ford Edge can be ordered with a glove box knee air bag and inflatable rear seat safety belts, the latter unique to Ford products. All models are equipped with anti-lock brakes, stability control and traction control. Curve control helps this model stay planted on twisty roads.

Pricing varies sharply between base and top edition models, ranging from just under $30,000 to well over $40,000. For 2015, Ford brings all-wheel drive to the base SE edition, thus a nicely optioned model with a turbocharged engine and all-wheel drive can be had for under $35,000.

In a segment that includes the Hyundai Santa Fe, Kia Sorento and the Toyota Venza, the Ford Edge outsells them all. The newest edition is better refined and offers improved engine choices and driver assist options to stoke customer interest. 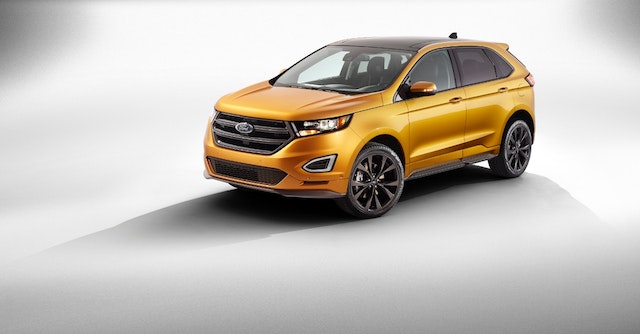 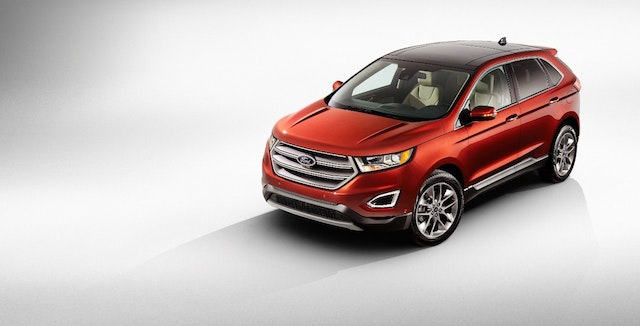 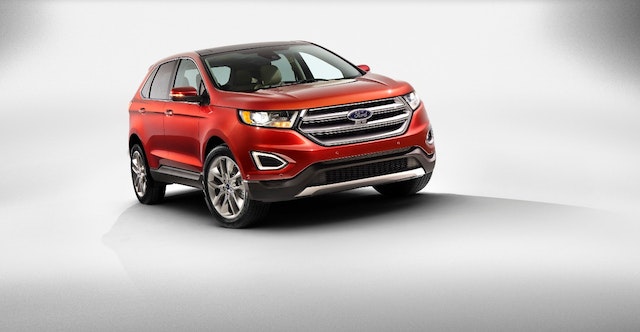 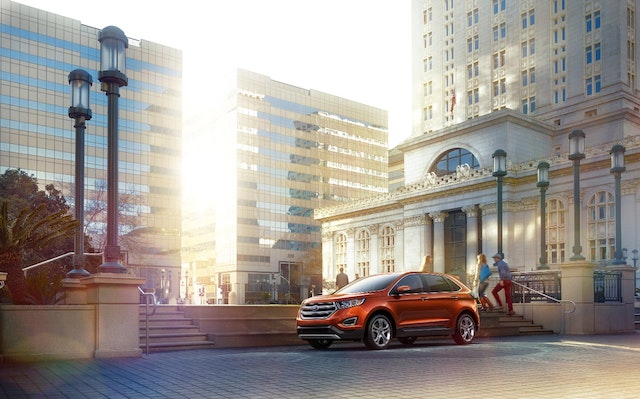 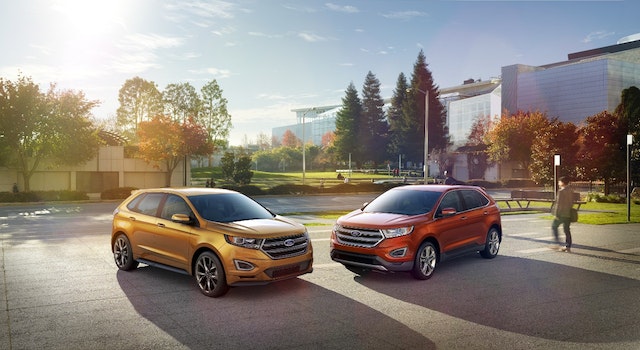 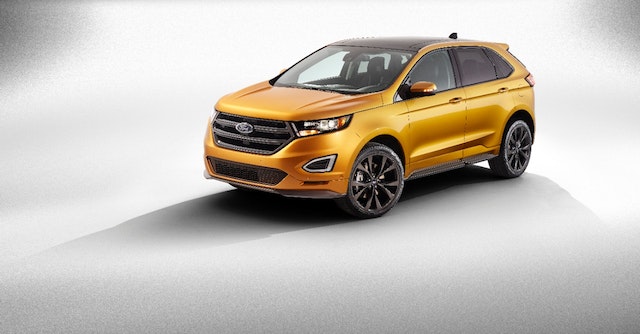 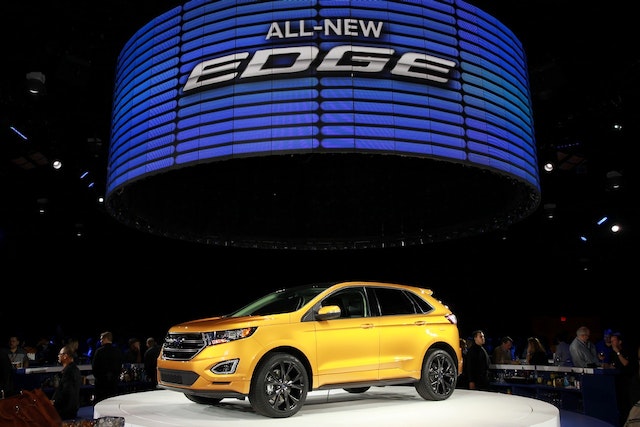 Does everything well
"This SUV is quiet, comfortable, has decent power and is pretty good looking! The 4 cylinder turbo is extremely quiet and smooth. Mileage can be as high as 32 MPG on interstate trips. I’ve owned or leased Jeep, Ford, GM and Acura SUVs, this has been equal to or better than the Acura, and I loved the Acura !"
Interior

I prefer cloth over leather. The cloth seats are nice quality and durable.
Exterior

Attractive, for an SUV.
Performance

Decent power, very quiet, great mileage. Handling is on par with the costlier SUVs. Ride and handling may be due to the excellent Michelins.
Family

Great Cars!
"The Ford Edge is definitely one of the best SUV's on the market. (Other than the Escape, Explorer, & Expedition.) There are so many positives about this vehicle that it would be a very long list & I am sure there's a word limit."
Interior

I didn't need a mini van or larger SUV since we only have two kids left at home. This car fits our family needs just right.
Cost

I've always believed that you get what you pay for & we got value & safety all in one vehicle & at a reasonable price.
Read Less

Quiet Car
"This vehicle has a lot more gadgets than I needed however, I purchased it used a year and a half ago. It is the quietest vehicle I have ever owned. For a heavier car, it gets good gas mileage. It handles very well and is a pleasure to operate. "
Interior

Passes great. Plenty of pick up. Great on curves.
Family

CARFAX offers millions of used cars for sale nationwide. Every listing includes the vehicle history. The data below is updated daily, based on used car inventory for sale on CARFAX.
2015 Ford Edge Deals on CARFAX
Percentage of 2015 Ford Edge for sale on CARFAX that are Great, Good, and Fair Value deals. Values are determined by whether the selling price is above, below, or the same as the history-based CARFAX Value.
Great Value
(118)
Good Value
(99)
Fair Value
(164)
No Badge
(136)
VEHICLE HISTORY SUMMARY
The Vehicle History Summary represents the percentage of cars available for sale on CARFAX that are reported to have no accidents or damage, had 1-owner, been used as a personal or personal lease car, and/or have service history information. 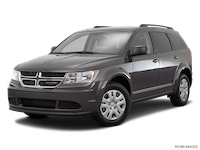 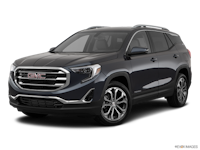 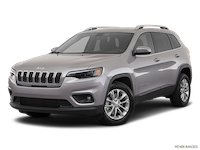