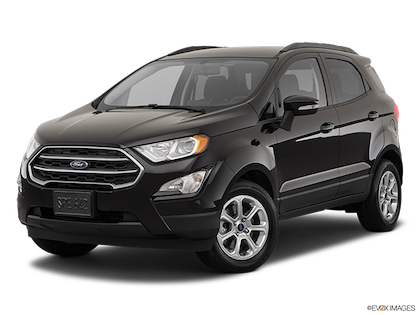 The 2019 Ford EcoSport offers some notable benefits if you’re shopping for a smaller SUV. These include a competitive level of cabin space and a number of high-end infotainment options. The EcoSport has a relatively powerful engine, and it’s one of the few vehicles in its class that’s rated for towing. That said, some rivals can provide better fuel economy and more safety technology.

A subcompact SUV, the EcoSport comes with a standard five-seat interior. The 2019 EcoSport family consists of S, SE, SES and Titanium trim levels. The base S model leads off with a three-cylinder engine, front-wheel drive and a six-speed automatic transmission. Ford also supplies an all-wheel-drive powertrain for the EcoSport with a four-cylinder engine.

As for new content, you can look for an SES Black appearance package. The highlight here is a black roof that’s matched with contrasting body colors for a two-tone appearance.

Sitting tall on its wheels, the EcoSport shows off a creased hood, a bold grille and especially large fog-light pockets. They’re nearly as big as the EcoSport’s aggressive headlights. For SUV-style details, the EcoSport has standard tow hooks and optional splash guards. Roof rails are available as well. As an unexpected functionality feature, the EcoSport’s rear hatch swings open sideways like a door.

The cabin of the 2019 EcoSport is available with two distinct looks. All trims have a smooth molded dash with an angular instrument-panel hood and a grab bar on the passenger side. Another unique feature are the center climate vents, which have the same basic shape as the vehicle’s grille. Models with the uplevel infotainment system feature a large freestanding screen. A 60/40-split folding bench is standard in the second row. The EcoSport has 20.9 cubic feet of storage behind those seats and 50 cubic feet in total. The 2019 Chevrolet Trax trails the EcoSport in both measures.

There are two different powertrains for the 2019 EcoSport, although both have a six-speed automatic transmission. In all trims except the SES, front-wheel drive and a turbocharged 1.0-liter three-cylinder engine are standard. Ford engineers squeeze 123 horsepower and 125 pound-feet of torque from that engine. All-wheel drive and a 2.0-liter four-cylinder engine are standard for the SES and optional for the other trim levels. This bigger unit makes 166 horsepower and 149 pound-feet of torque. With that output, the EcoSport can tow up to 2,000 pounds. Competitors like the 2019 Honda HR-V are not recommended for towing at all.

The EcoSport then matches the 2019 Chevrolet Trax for fuel economy in combined driving. For the Ford, that includes EPA ratings of up to 27/29 mpg city/highway. However, the HR-V is more efficient than both.

The SE trim level brings in rear parking sensors and Ford’s Sync 3 infotainment system, which includes a 6.5-inch touch screen, Android Auto, Apple CarPlay and satellite radio. You can also get the EcoSport with mobile Wi-Fi, a navigation system, an 8-inch touch screen and a 675-watt B&O Play sound system with HD radio. 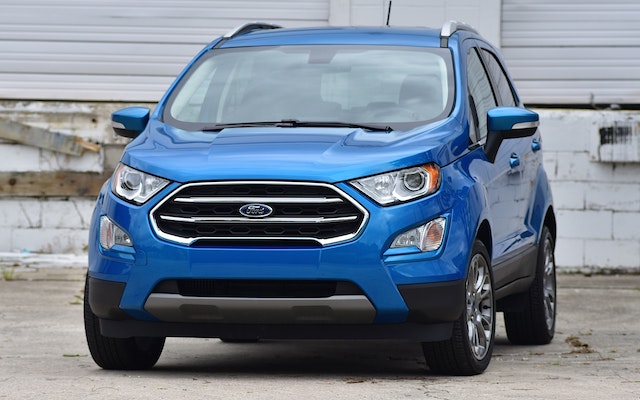 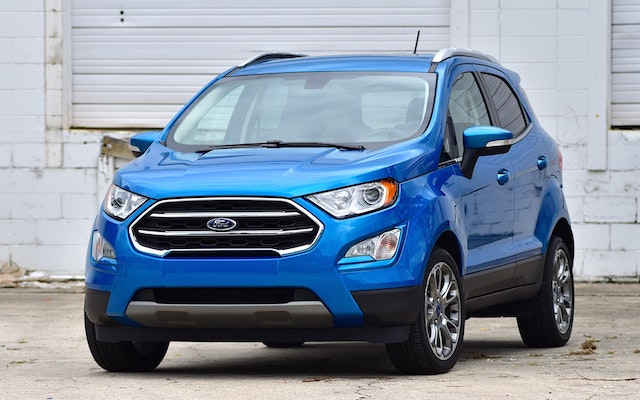 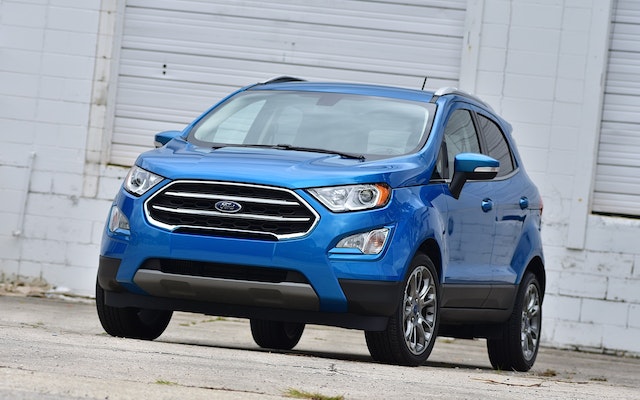 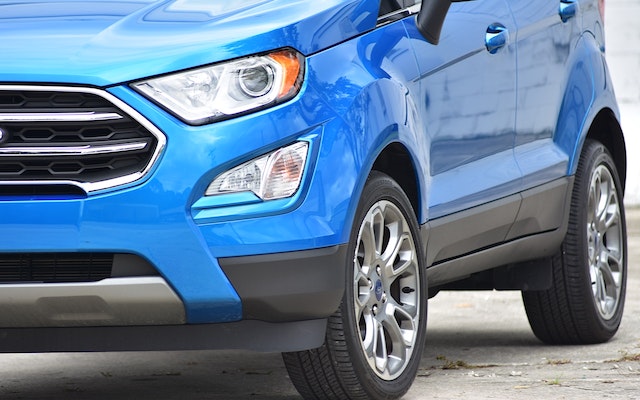 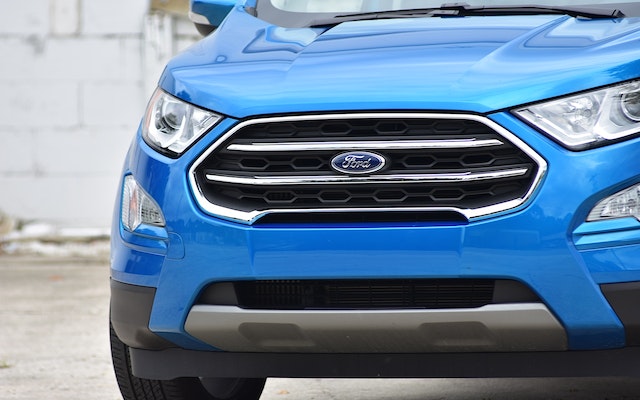 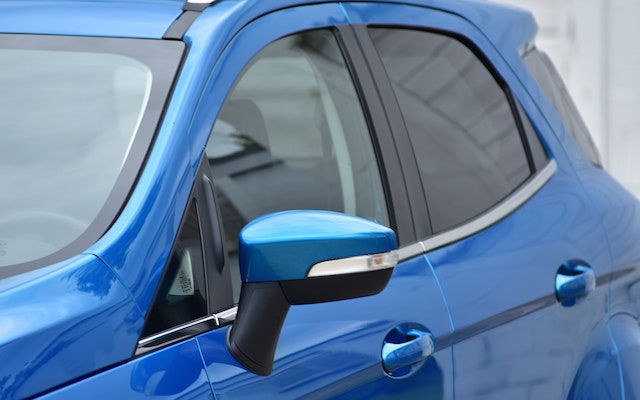 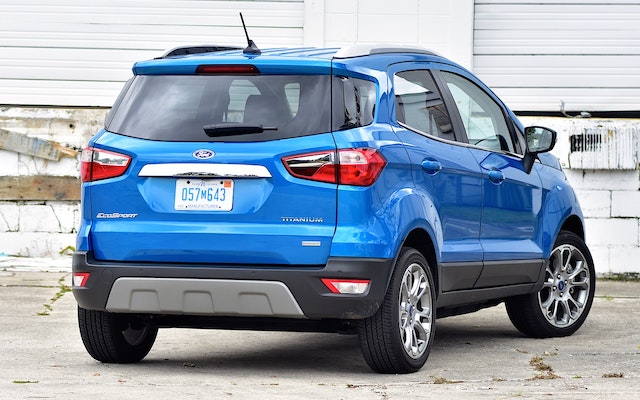 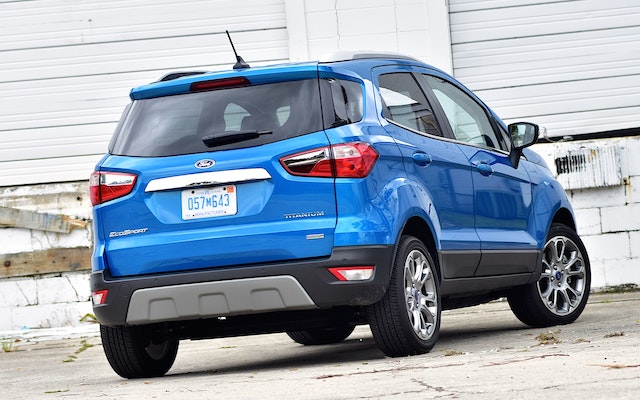 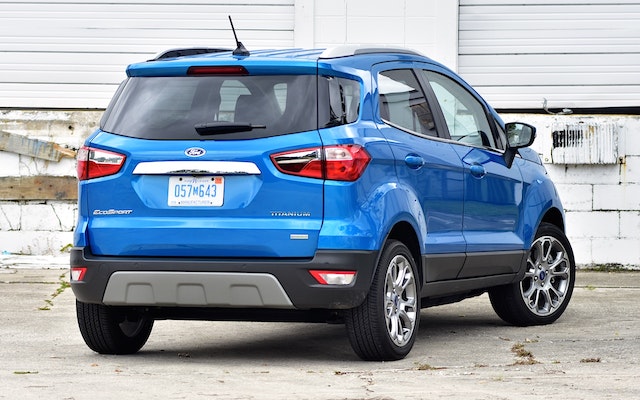 * IIHS rates vehicles Good, Acceptable, Marginal or Poor
The 2019 Ford EcoSport has not been tested

My EcoSport
"I love my EcoSport! It’s fun to drive and let’s me know when I need to be aware of an issue. It handles well on long trips and has great mileage (31 mpg highway). "
Interior

It’s about the same size inside as the Escape I owned in 2006. It has more inside amenities and overall safety equipment than the Escape had.
Exterior

It’s easy to handle and to maintain. I didn’t think I’d get used to the engine shutting down when in idle, but I did.
Family

31 mpg/highway and about 24 in town. Oil change is only once a year. The diagnostic system is first rate, letting me know when anything is out of sorts.
Read Less

Ford EcoSport 2019
"I LOVE it !!!! It is excellent on gas and just enough room for myself and my Granddaughter in her car seat. She loves it too :)"
Interior

The dashboard that shows everything. Navigation, music, etc. My cupholder and door handles illuminate. It's awesome to have. The sound system is amazing. I can also control my phone and music on my steering wheel. It is great as well. The hatchback holds all of my groceries without any problem.
Exterior

I have a sunroof and a luggage rack which is exactly what I wanted. The lights on the front are very stylish.
Performance

It handles great. It quiet and the ride is very smooth.
Family

It is perfect for me. I am the only one that drives in it, and at times with my granddaughter.
Cost

3 month review
"I really like all the features of this vehicle. Gas mileage, comfort, driving ability. and a quiet ride."
Interior

Easy to keep up!
Exterior

Plenty of power for the interstate.
Family

Yes, the car is family-friendly
Cost

The price is affordable.
Read Less

CARFAX offers millions of used cars for sale nationwide. Every listing includes the vehicle history. The data below is updated daily, based on used car inventory for sale on CARFAX.
2019 Ford EcoSport Deals on CARFAX
Percentage of 2019 Ford EcoSport for sale on CARFAX that are Great, Good, and Fair Value deals. Values are determined by whether the selling price is above, below, or the same as the history-based CARFAX Value.
Great Value
(265)
Good Value
(271)
Fair Value
(233)
No Badge
(141)
VEHICLE HISTORY SUMMARY
The Vehicle History Summary represents the percentage of cars available for sale on CARFAX that are reported to have no accidents or damage, had 1-owner, been used as a personal or personal lease car, and/or have service history information.