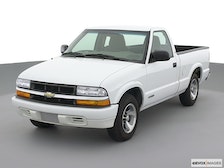 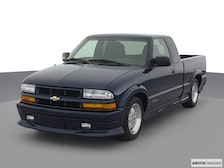 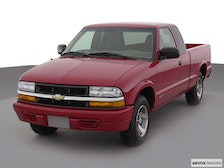 The Chevrolet S-10 is a compact pickup truck that was introduced in 1982 and built through 2004. This truck, along with the similar GMC S-15, replaced the earlier Chevrolet LUV. The S-10 itself was followed by the Chevrolet Colorado in 2005.

Following a decade of relying upon Isuzu to supply it with a small pickup truck, General Motors launched the Chevrolet S-10 and the GMC S-15. Upon introduction, the Chevrolet S-10 was offered as a regular cab model. An extended cab model and an available four-wheel drive system followed in 1983.

Initially, the Chevrolet S-10 was powered by an Isuzu-supplied 1.9-liter four-cylinder engine. Chevrolet also offered a 2.8-liter V6 engine. Both engines were paired with either a four-speed manual or a three-speed automatic transmission. Both short- and long-bed versions were available with payloads ranging from 1,000 to 1,500 pounds.

In addition to adding an extended cab model for 1983, Chevrolet brought in two new engines. A 2.0-liter four-cylinder gas engine and an Isuzu-supplied 2.2-liter diesel engine were available. Separately, an SUV variant made its debut, the Chevrolet S-10 Blazer.

Changes throughout the first-generation run included adding heavy-duty and off-road suspensions for 1984 and replacing the 2.0-liter four-cylinder gasoline engine with a 2.5-liter four cylinder for 1985. For 1986, the two Isuzu-supplied engines were discontinued, and the V6 gained throttle body injection. Two years later, a 4.3-liter V6 engine was added and paired with a four-speed automatic transmission.

Antilock brakes were made available for 1989 and a digital instrument panel was introduced. Beginning in 1992, an electronic shift transfer case became an option on four-wheel drive models.

The second-generation Chevrolet S-10 made its debut for 1994 and came with a new base engine: a 2.2-liter four cylinder. This engine came paired with a five-speed manual or a four-speed automatic transmission. The 4.3-liter V6 was updated and offered the same transmission pairings. Regular and extended cab models were offered with short- and long-bed choices.

An SS version also was produced, debuting for 1994. This model was available through 1998 and featured a high-output version of the V6 engine. It also came with a sport suspension and alloy wheels. That year, a ZR2 package was also introduced, bringing in large off-road tires, a modified suspension and standard four-wheel drive.

For 1996, a stepside cargo box arrived, and extended cab models received third-door access on the driver’s side. The S-10 was refreshed for 1998, receiving a new front fascia and an updated interior with dual air bags. For 1999, the sporty Xtreme package was released. Available only with rear-wheel drive, this version of the S-10 sits 2 inches lower to the ground than the standard truck.

Beginning with the 2001 model year, Chevrolet added a crew cab model, providing room for up to five. The S-10 was discontinued following the 2004 model year and replaced by the Chevrolet Colorado. The Toyota Tacoma, Nissan Frontier, Dodge Dakota and Honda Ridgeline might be cross-shopped alongside the S-10.

CARFAX offers millions of used cars for sale nationwide. Every listing includes the vehicle history. The data below is updated daily, based on used car inventory for sale on CARFAX for the last five model years of this car. Find Used Chevrolet S-10 For Sale
Chevrolet S-10 Deals on CARFAX
Percentage of Chevrolet S-10 for sale on CARFAX that are Great, Good, and Fair Value deals. Values are determined by whether the selling price is above, below, or the same as the history-based CARFAX Value.
Great Value
(5)
Good Value
(2)
Fair Value
(2)
No Badge
(6)
VEHICLE HISTORY SUMMARY
The Vehicle History Summary represents the percentage of cars available for sale on CARFAX that are reported to have no accidents or damage, had 1-owner, been used as a personal or personal lease car, and/or have service history information.