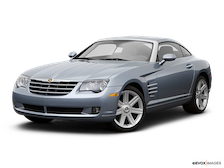 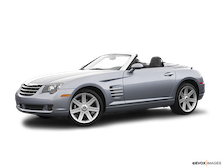 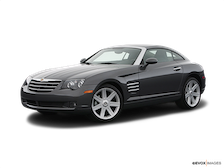 Born of a partnership between Mercedes-Benz and Chrysler, the Crossfire offers a mix of European mechanicals and brash American design. The Crossfire’s handling is poised, and its sheet metal makes a bold statement.

The Chrysler Crossfire made its debut with the 2004 model. Available as either a coupe or a roadster, this car’s sporty appearance and unique pedigree help distinguish it from its competition. The Crossfire’s time on the market was brief, and it was retired after the 2008 model year.

Whether you choose the coupe or the convertible, the Crossfire seats just two passengers. A six-speed manual transmission is standard, and a five-speed automatic is offered as an option. Power is sent to the car’s rear wheels.

Its athletic exterior design is one of the Crossfire’s strongest assets. With its long nose and high beltline, the car looks powerful and assertive. A deeply ridged hood adds muscular dimension up front, and it overlooks Chrysler’s blocky signature grille.

The Crossfire’s cabin is reasonably stylish, and it’s dominated by a center stack that bears a graceful waterfall design. As is often the case with two-seat sports cars, the interior presents a cramped environment. There’s also not a whole lot of utility on hand, since cargo capacity is quite limited.

Though the Crossfire’s exterior design gives it an aggressive look, this car’s driving dynamics are relatively tame. On the plus side, this Chrysler provides a smooth ride quality that makes it an excellent highway companion. The Crossfire relies on a standard 3.2-liter V6, and this engine generates 215 horsepower. In 2006, a supercharged 3.2-liter V6 became available, offering 330 horsepower. This optional engine was discontinued after just one year.

When it was first introduced, the Crossfire was available in a single, well-equipped trim level.  Leather upholstery is standard, as well as heated power-adjustable front seats. Also, all models come with manual dual-zone climate control and a CD player. Initially, only the coupe body style was available.

The Crossfire benefited from a series of upgrades over the years. The convertible body style joined the lineup in 2005, and a new lower-priced base trim was added. For the 2006 model year, a Special Edition package was introduced, bringing in unique exterior accents. Also, a new high-performance SRT-6 trim was added, powered by the previously mentioned supercharged V6.

The Chrysler Crossfire is often cross-shopped against models like the Toyota Camry Solara, Mazda MX-5 Miata and Chevrolet Corvette. Its singular design and pleasant handling will make the Crossfire an appealing choice for some shoppers.

CARFAX offers millions of used cars for sale nationwide. Every listing includes the vehicle history. The data below is updated daily, based on used car inventory for sale on CARFAX for the last five model years of this car. Find Used Chrysler Crossfire For Sale
Chrysler Crossfire Deals on CARFAX
Percentage of Chrysler Crossfire for sale on CARFAX that are Great, Good, and Fair Value deals. Values are determined by whether the selling price is above, below, or the same as the history-based CARFAX Value.
Great Value
(6)
Good Value
(12)
Fair Value
(8)
No Badge
(15)
VEHICLE HISTORY SUMMARY
The Vehicle History Summary represents the percentage of cars available for sale on CARFAX that are reported to have no accidents or damage, had 1-owner, been used as a personal or personal lease car, and/or have service history information.