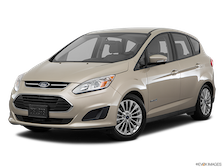 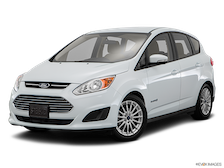 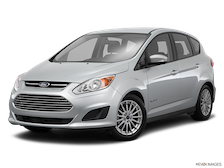 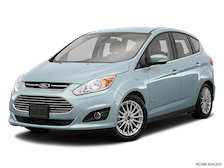 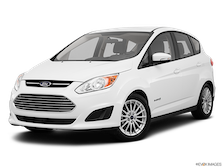 Introduced in 2013, the Ford C-Max is based on the same platform underpinning the Ford Focus and Ford Escape and is best described as a tall wagon, with front-wheel drive and room for five.

The Ford C-Max and Toyota Prius have something in common: both models are hybrid-only vehicle lines.

Ford sells the C-Max in standard and plug-in hybrid variants, the latter known as the Ford C-Max Energi. Both models look the same, but the Energi has distinct badging and a plug-in port near the front wheel well on the driver’s side. This four-door model has a large grille, wraparound headlights, a short hood and a tapered roof line. To the rear is a tailgate.

All models are outfitted with a 2.0-liter four cylinder engine making 141 horsepower and paired with a continuously variable transmission and an electric motor. When both the electric motor and gas engine are working in tandem, this model makes 188 horsepower.

The Ford C-Max Hybrid is EPA-rated at 42/37 mpg city/highway. The Ford C-Max Energi is rated 95/81 mpg-equivalent city/highway, but that methodology does not correspond with standard fuel economy measurements. The Energi has a 19-mile electric-only range and averages 38 mpg when operating on gasoline only; this model can be connected to a standard home outlet, or a fast-charging 240-volt outlet to replenish the battery in about three hours.

Each model comes with painted aluminum wheels, blind spot mirrors, a rear spoiler and a manual liftgate. A power liftgate and heated side mirrors are available. C-Max Energi models come with an illuminated charge port.

Inside, the cabin offers generous room for five with a roomy back seat. However, this model comes with a small cargo area as the battery pack is located behind the rear seat.

In crash testing conducted by the Insurance Institute for Highway Safety (IIHS), the Ford C-Max received a Top Safety Pick rating. This model comes with a suite of air bags, including a driver’s knee air bag. Stability control, traction control, brake assist and a post-collision crash system are included.

Standard and plug-in versions of the Toyota Prius are the closest competitors to the Ford C-Max. The Chevrolet Volt might also be considered.

CARFAX offers millions of used cars for sale nationwide. Every listing includes the vehicle history. The data below is updated daily, based on used car inventory for sale on CARFAX for the last five model years of this car. Find Used Ford C-Max For Sale
Ford C-Max Deals on CARFAX
Percentage of Ford C-Max for sale on CARFAX that are Great, Good, and Fair Value deals. Values are determined by whether the selling price is above, below, or the same as the history-based CARFAX Value.
Great Value
(238)
Good Value
(272)
Fair Value
(207)
No Badge
(156)
VEHICLE HISTORY SUMMARY
The Vehicle History Summary represents the percentage of cars available for sale on CARFAX that are reported to have no accidents or damage, had 1-owner, been used as a personal or personal lease car, and/or have service history information.