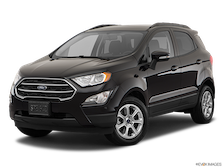 Subcompact SUVs like the Ford EcoSport are small enough to easily slide into tight parking spaces, and they offer great utility. It’s no wonder they’ve become popular with a large swath of car buyers. Offering generous cargo space and a pleasantly tall seating position, the EcoSport is an appealing choice in this growing segment.

Ford added the EcoSport to its lineup in the 2018 model year, and this subcompact crossover seats five passengers. It’s more petite than the Ford Escape, and it stands as the smallest crossover SUV in the automaker’s lineup.

Front-wheel drive is standard, and all-wheel drive is optional for those who need more secure footing in weather that’s wet or snowy. At launch, the EcoSport was introduced in S, SE, SES and Titanium trim levels. All-wheel drive is commonly available on all trims, from the base S to the top-of-the-line Ford EcoSport Titanium.

Ford’s small crossover has a tall, somewhat narrow stance. Its snub-nosed profile features a high beltline and prominent wheel wells. Deeply sculpted side panels give the EcoSport a sporty appearance. The large rear hatch has the same chiseled look as the side panels.

The EcoSport’s attractively designed cabin is home to a curvaceous dash and a sleek center console. The front seats are roomy, and passengers in the rear seat enjoy an adequate amount of space. The driver sits in a high seating position, and this provides good sightlines. The vehicle’s upright stance makes ingress and egress easy.

Cargo space is one the EcoSport’s primary strengths. It offers more room for your stuff than most other choices in this segment.

Handling is reasonably responsive. Despite the EcoSport’s tall stance, it remains composed in turns, tackling corners without exhibiting an undue amount of body roll. A choice of two power plants includes a turbocharged 1.0-liter three-cylinder engine and a 2.0-liter engine with four cylinders.

CARFAX offers millions of used cars for sale nationwide. Every listing includes the vehicle history. The data below is updated daily, based on used car inventory for sale on CARFAX for the last five model years of this car. Find Used Ford EcoSport For Sale
Ford EcoSport Deals on CARFAX
Percentage of Ford EcoSport for sale on CARFAX that are Great, Good, and Fair Value deals. Values are determined by whether the selling price is above, below, or the same as the history-based CARFAX Value.
Great Value
(454)
Good Value
(520)
Fair Value
(256)
No Badge
(145)
VEHICLE HISTORY SUMMARY
The Vehicle History Summary represents the percentage of cars available for sale on CARFAX that are reported to have no accidents or damage, had 1-owner, been used as a personal or personal lease car, and/or have service history information. 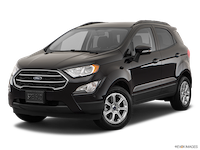