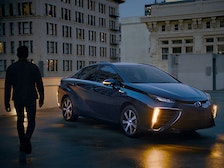 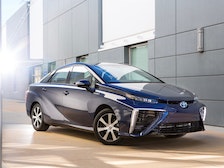 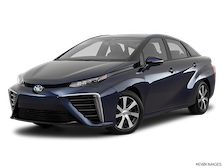 Introduced for the 2016 model year, the Toyota Mirai is powered by hydrogen fuel cell technology. This sedan converts compressed hydrogen and oxygen to produce electricity. This process generates zero emissions, so the Mirai is a choice to consider if you’re seeking transportation that’s clean and green.

There’s good news and bad news regarding the Toyota Mirai. The good news is that this sedan offers the benefits provided by electric cars with fewer of the drawbacks that come with EVs. While electric cars can take several hours to charge, the Mirai is powered by compressed gas, and a fill-up takes just five minutes or so. The Mirai uses this hydrogen to generate electricity for its electric motor, and it achieves this process while generating zero harmful emissions. This makes the Mirai a choice that’s just as clean as a conventional electric vehicle. The Mirai also offers better range than many EVs, and it’s able to travel for 312 miles between fill-ups.

Toyota’s Mirai is a hydrogen fuel cell vehicle that seats four, and it comes with front-wheel drive and a single-speed transmission. Bold and futuristic, the Mirai’s sheet metal is bound to be polarizing. In front, brash fog lights edge its tall lower grille, and squinting standard LED headlights peer from beneath a sculpted hood. The overall look is angular and powerful.

The Mirai features a four-phase fuel cell boost converter that melds compressed hydrogen with oxygen to create electricity for the sedan’s 113-kW electric motor. A nickel-metal hydride battery is on board, and a pair of carbon-fiber-reinforced high-pressure tanks tackle the task of storing the vehicle’s hydrogen. The Mirai’s motor provides output of 151 horsepower, and acceleration from 0-60 mph takes 9 seconds. It’s worth noting that this is a good deal slower than the acceleration offered by certain electric cars.

Mirai drivers enjoy amenable ride quality, and the sedan does an admirable job of shielding passengers from harshness. As with other electrified cars, power delivery is swift, and torque is available the minute your foot hits the throttle.

With its asymmetrical lines and dramatic design cues, the Mirai’s cabin looks like something from science fiction. It gets the job done from a practical perspective, though, offering spacious accommodations for both rows of passengers. The interior features high-grade materials, and there are lots of soft-touch surfaces. Cargo capacity comes in at 12.8 cubic feet.

Features such as heated side mirrors and dual-zone climate control are standard on the Mirai. The sedan also provides an impressive assortment of standard driver-assistive technology, including features such as blind-spot warning and forward collision mitigation.

If you’re looking for a fuel cell vehicle, you’ll also want to consider the Honda Clarity Fuel Cell sedan and Hyundai Tucson Fuel Cell crossover. The Mirai certainly holds its own among this limited group of rivals, and it’s a good pick if you want to be an early adopter of hydrogen fuel cell technology.

CARFAX offers millions of used cars for sale nationwide. Every listing includes the vehicle history. The data below is updated daily, based on used car inventory for sale on CARFAX for the last five model years of this car. Find Used Toyota Mirai For Sale
Toyota Mirai Deals on CARFAX
Percentage of Toyota Mirai for sale on CARFAX that are Great, Good, and Fair Value deals. Values are determined by whether the selling price is above, below, or the same as the history-based CARFAX Value.
Great Value
(27)
Good Value
(22)
Fair Value
(1)
No Badge
(7)
VEHICLE HISTORY SUMMARY
The Vehicle History Summary represents the percentage of cars available for sale on CARFAX that are reported to have no accidents or damage, had 1-owner, been used as a personal or personal lease car, and/or have service history information.