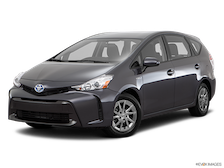 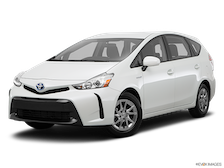 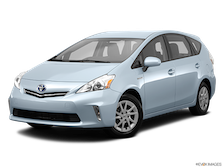 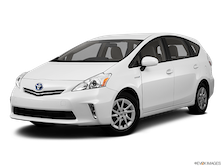 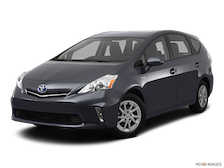 The Toyota Prius v is a wagon-like model from the Prius lineup of hybrid cars. Introduced for the 2012 model year, the Prius v is prized for its utility, which is particularly impressive considering its two main virtues: low emissions and extraordinary fuel economy.

The Toyota Prius v represents the largest of the hybrid models in the Prius range, measuring longer between the wheels (and overall) than the standard Toyota Prius hatchback. This model is slightly wider, too. Toyota says the “v” stands for versatility.

Prior to the standard Prius’ 2016 update, the two models shared common exterior design themes. The layout of each differs slightly, with the Prius v being more of a wagon than a hatchback.

Up front, the Prius v’s fascia is marked by a narrow upswept grille that’s hemmed in by flared headlight assemblies. The lower grille opening is large, with available fog lights at each lower corner. Boomerang LED lights are also present.

This model has a plunging hood, a sloping roofline and a slightly rising beltline. After the third pillar, the beltline rises dramatically to meet the roofline. The profile is marked by a pronounced upper character line and a subtle lower character line. To the rear is a liftgate spoiler, a pair of oversized combination lamps and reflector lights.

Typical of the Prius line, the Prius v’s center stack contains the instrument panel, infotainment display and other driver-oriented information in one place. Since its release, Toyota’s Entune multimedia system has been available, with various updates rolled out from year to year. That system combines navigation, entertainment and information services.

A light refresh was rolled out for the 2015 model year, bringing with it a new front fascia and LED tail lamps.

Since its introduction, the Prius v has been powered by a 1.8-liter four-cylinder engine paired with a continuously variable transmission (CVT). This powertrain is part of a hybrid system featuring two electric motors.

Few models compete directly with the Toyota Prius v. The Ford C-Max is the model closest to this vehicle in style and proportions. The standard Prius and the subcompact Prius c might also be considered. The Toyota RAV4 Hybrid is another option, offering similar utility in an SUV-style package.

CARFAX offers millions of used cars for sale nationwide. Every listing includes the vehicle history. The data below is updated daily, based on used car inventory for sale on CARFAX for the last five model years of this car. Find Used Toyota Prius v For Sale
Toyota Prius v Deals on CARFAX
Percentage of Toyota Prius v for sale on CARFAX that are Great, Good, and Fair Value deals. Values are determined by whether the selling price is above, below, or the same as the history-based CARFAX Value.
Great Value
(67)
Good Value
(71)
Fair Value
(133)
No Badge
(129)
VEHICLE HISTORY SUMMARY
The Vehicle History Summary represents the percentage of cars available for sale on CARFAX that are reported to have no accidents or damage, had 1-owner, been used as a personal or personal lease car, and/or have service history information. 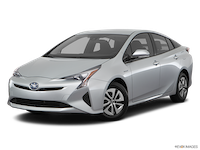